Vietnam is a cultural extravaganza waiting to be explored. With its breathtaking vistas and exotic cuisine, Vietnam is rapidly becoming a ‘must visit’ destination in South-East Asia. The country is full of welcoming people and great sites that will surely sweep you off your feet! There are so many places to visit that if you are not prepared, you are sure to miss out on some of the best places to visit.
One of the best things about visiting Vietnam is the number of options in regard to places to visit and things to do. From the War Remnants Museum to the quaint rustic town of Hoi An, there are literally a ton of places to visit while you are in Vietnam. The striking diversity of the country that includes Metropolitan cities, Colonial towns and picturesque valleys and mountains adds a certain degree of allure to the great country of Vietnam. Well, if you are planning a trip to Vietnam, here are some of the best destinations that will make your trip truly an otherworldly experience. So, without further adieu, let the countdown begin! 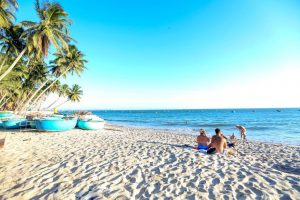 The sand dunes of Mui Ne are one of the most spectacular geological phenomena that you need to see to believe. The picturesque red and white sand dunes are sure to transcend you to a whole different world. The landscape is almost like an oasis in the middle of a gigantic desert.
There are a number of tour operators that can assist you in fully exploring the dunes and soaking up the landscape. However, if you are one of those exploring types, you can explore both the red and white dunes on your own. Apart from soaking up the view, you can also rent plastic sleds and experience sand surfing as well. One of my favorite things to do here is flying kites over the dunes. The strong winds and great location will make the inner child in you just want to run with a kite!
The best time to visit these dunes is right around sunrise or just before sunset. Although you can enjoy a great picnic literally all day long as well. 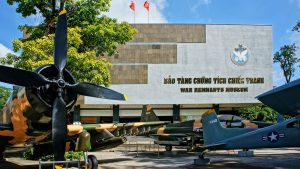 One of the poignant reminders of the great war, The War Remnants Museum, located in the city of Ho Chi Minh, is one of the sites you have to visit. Opened to the public back in 1975, the museum was previously called the ‘The museum of American War Crimes’.
It serves as a reminder of the brutal and devastating war between Vietnam and the United States that lasted from 1945 to 1975.
The museum is full of some of the graphic imagery from the war era. There is a number of American military equipment in the museum as well. The long list of equipment include tanks, helicopters, and many warheads.
Although it is one of the most visited sites in the city, many people may have a traumatic experience visiting the place especially, for children. But of you decide to visit, the museum is open from 7:30 in the morning to 5:00 in the evening, all year round. 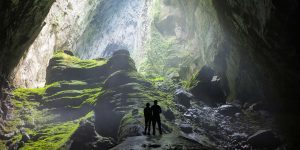 One of the UNESCO world heritage sites, the National park is one of the most magnificent natural geological formations. The park is home to one of the Asia’s biggest and oldest Karst formation. It is a visual treat formed by the movement of earth’s crust hundreds of million years ago.
The formation is composed of almost 2000 square kilometers of limestone that are punctuated with a labyrinth of caves running several kilometers.
Apart from visiting the caves and the grottos, there are a ton of things you can do in the park itself. Many people also enjoy boating through the grottos and climbing the steep cliffs. The park is open to visitors all year round and the best time to visit is throughout the day. Although if you can catch the sun rising in the park early in the morning, it is a sight to behold! 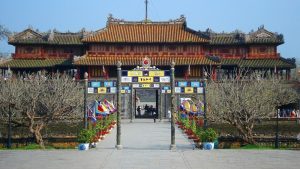 Another UNESCO world heritage sites of the country, Hue was the capital city of the country when Vietnam was founded way back in 1802. The city held its own till 1945 when it fell along with the Nguyen Dynasty.
The site is full of historic monuments and ruins. Among one of the most visited sites include the so-called Forbidden Purple City. It was the home of the royal family before it was badly ruined in the Vietnam War.
The impressive buildings, pagodas and beautiful landscape make the site a must visit location for any tourist. There is a great tour available although, the seats get booked early, so if you are interested, you better act fast. The site open throughout the year, but its best to avoid Hue between the months of October and December as the city receives the bulk of its rainfall during these months. 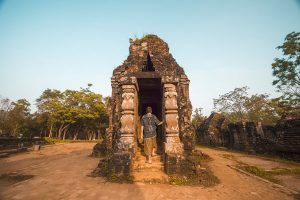 One of the lesser known facts about Vietnam is the fact that during the ancient times, Vietnam was ruled by the Champa Dynasty of southern India. One of the remnants of those times is an ancient Hindu Sanctuary called My Son Hindu Sanctuary.
The beautiful Hindu sanctuary is filled with ruins of Hindu temples and relics. The stone carved temple remnants and the surrounding jungle is one of the most exhilarating sites that you will see in the country. There are almost 70 structures featuring some of the great ancient sculptures of Hindu gods and goddesses and also the royalty of the Champa Dynasty.
As this is one of the most visited places in the country, the best time to visit is early in the morning before the place gets too crowded. 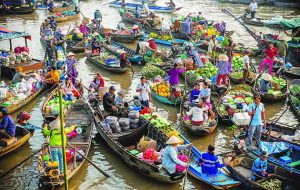 The country of Vietnam hosts is one of the most fertile deltas in southern Asia. The Mekong Delta is one of the most fertile places in the country. As a matter of fact, it is called the ‘Rice Basket of Vietnam’. The whole delta region has numerous man-made and natural tunnels that make the landscape quite unique.
When you visit the Delta, the site of ‘floating markets’, orchards, rice fields and quaint villages is ready to greet you with both hands!
There are a number of things to do and a number of places to visit. If you are one big foodie, the place is like a food heaven. You can have a taste of authentic local cuisine that will awaken all your senses! 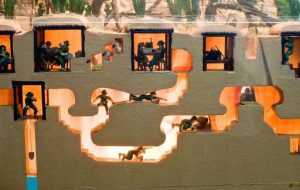 Another site commemorating the Vietnam War, the tunnels of Cu Chi are one of the gateways to get a sneak peek at the Viet Cong era. There are over 100 km tunnels that were hand dug by the soldiers of the Viet Cong.
The soldiers started carving out the tunnels during the French-Vietnam war and the work never stopped till the end of the Vietnam war. Although the tunnels have since been widened and coated with concrete to make them safer for the visitors, they still represent a moment frozen in time.
You can visit the tunnels all year long but make sure that you have a lot of free time to explore the tunnels if you like history! 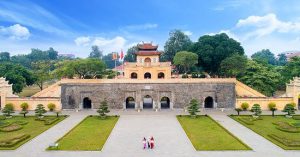 Located in the historic city of Hanoi, the citadel is one of the best places you can visit while in Vietnam. This is also one of the UNESCO world heritage sites. The citadel was a center stage of political movements in the country for a better part of 13 centuries!
The site is filled with relics and ancient monuments that dating back as far as the 6th century.
Archeological excavations in and around the city of Hanoi has revealed a number of artifacts that housed in the Citadel. The Hanoi Flag tower is one of the most popular destinations amongst visitors.
The Citadel is open to the public almost for the entire year. However, if you are a keen tourist, you will find time in your itinerary to visit the display room in the Citadel. 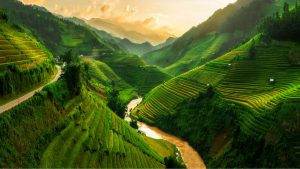 The City of Sapa is a picturesque city located in the remote northwest part of the country. The city is completely surrounded by beautiful mountains that are thickly forested. The town itself is a quaint, traditional Vietnamese town that offers great trekking expeditions.
The rice terraces of the town are something to look forward to. There are numerous tours that you can take around the city to explore the majestic mountains and visit some of the nature’s bounties Vietnam has to offer. The waterfalls and trails are sure to satisfy the adventurous streak in you!

Although you can visit the town all year round, be advised that the rainiest months are July and August. 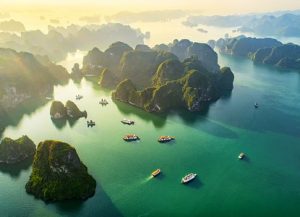 One of the most breathtaking views in Vietnam is offered by the Ha Long Bay. The aqua green water to a sight to behold. The rocky formations rising above the water are as majestic as they are beautiful.
The Bay itself is quite easily reachable from the city of Hanoi. The bay itself is full of small islands that offer a great ecosystem for the varied flora and fauna. If you are someone who loves nature, you just can’t leave Vietnam without visiting the Ha Long Bay!

Vietnam is one of those Asian countries that is gaining popularity as a tourist destination. The friendly people, beautiful locale, and ease of transportation make it an ideal place to visit in all of Asia.
If you are planning a trip to Asia, make it a point to visit the great country of Vietnam! We hope that the above list will help you plan one of your most memorable trips ever!